New Delhi: The much revered exponents of the Banaras Gharana of Indian Classical Music Pt. Rajan-Sajan Mishra vowed the audience with their vocal recitals while legendary flutist Pt. Hariprasad Chaurasia delighted classical music lovers of Delhi with his rendition of the instrument on the second day of the Delhi Classical Music Festival. The Festival of Classical Indian Music is organized by Department of Art, Culture & Languages, Govt. of Delhi and Sahitya Kala Parishad. 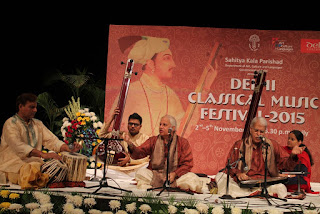 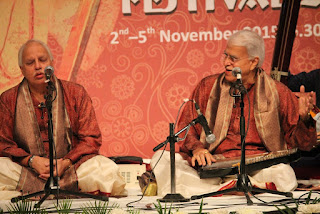 Pandit Rajan and Sajan Mishra are accomplished singers of the ‘khyal’ style of Indian classical music. Exponents of the Banaras Gharana of singing, Pandit Rajan and Sajan Mishra have delighted audience all over the world. Their creativity and contribution to the art has won them wide recognition from various quarters, including the much coveted Padma Bhushan as well as the Sangeet Natak Academy Award.

Pandit Hariprasad Chaurasia, on the other hand, needs no introduction as one of India’s most renowned flutist.

Some of the most revered stalwarts of the Indian classical music including Pt. Jasraj and Ustad Amjad Ali Khan are among a host of exponents of different classical traditions who are performing at one of the biggest classical music festivals in the country, being held at the Kamani Auditorium from 2nd-5th November.

The festival will showcase nine artists over four days with an interesting mix of senior and venerated artists and fresh talent.

“The origins of Indian classical music can be found in the Vedas, the oldest scriptures in the Hindu tradition dating back to 1500 BCE. However, over the centuries, our music has incorporated inputs from multiple sources and has enriched itself with confluence of different traditions that met in the Indian subcontinent. Our instruments have held their own even in times of digital and techno driven musical instruments. Indian classical music is a true representative of our rich identity,” says Pt. Hariprasad Chaurasia.

“In recent years there has been an animated debate on whether our classical music is losing out to the modern pop culture. However, when I see young music enthusiasts eager to learn our classical traditions and keen to master their hands in it, I feel confident of a bright future for our indigenous music. We need more such festivals to encourage young talent on the scene,” says Ustad Amjad Ali Khan.

The third evening will begin with a Sitar & Sarod (Duet) recital by Lakshay Mohan & Ayush Mohan Gupta; this will be followed by Sitar recital by Ustad Saeed Zafar Khan; and vocal recital by renowned classical music vocalist Pt. Jasraj.

The festival will end on November 5 with a vocal recital by Ashwini Bhide Deshpande and sarod recital by Ustad Amjad Ali Khan.
at 5:22 PM