Friday evening saw a number of Filmmakers of Delhi Circuit attending the screening of a short film ‘Sinking India’ at the Friendship Film Festival organized in collaboration with the Russian Centre of Science & Culture. Sinking India a short film highlighting the issue of female infanticide which is a matter of great importance. 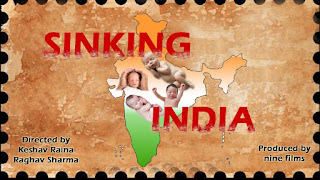 Talking at the event Directors of the film Keshav Raina & Raghav Sharma said “This is our small attempt to highlight this issue and hit hearts of the audience to change the society and make people realize that things which are shown in the film does exist till today. Recently, we met a very senior person of the industry who watched the film and said that why are showing these things, these things don’t happen anymore. But the matter of fact remains that society hasn’t changed and people do discriminate on gender. And we hope to get support from our Hon’ble Prime Minister Narendra Modi one day.”

Prime Minister Narendra Modi has spoken on these issues several times. PM’s recently launched campaigns Selfie with Daughter and Beti Bachao Beti Padhao were a big hit and saw some change in the society.