former high-ranking employee who took to social media to allegedly defame his employer after his services were terminated. The Bombay high court, which ruled in the company's favour, has imposed a fairly comprehensive gag order on the disgruntled worker, asking him to remove all material deemed libelous and forbidding him from making any disparaging remarks about a wide section of Tata employees.

The provocateur, Nityanand Sinha, a former general manager at HL Homes, a joint venture company of one of the Tata Housing firms, has been directed by Justice Gautam Patel to refrain from issuing derogatory statements about the firm in the future. The breadth of this includes "then directors, principal officers, agents, representatives, employees, servants, clients, business associates, business partners, companies forming a part of the Tata group of companies".

The vehicle and its intended destination too receives the court's attention. Sinha cannot defame those mentioned above "by way of emails, letters, SMSs, social media posts, websites, newspapers print or electronic, or in any other manner whatsoever, to any third parties/ general public including but not limited to newspaper editors, journalists, clients, business associates/business partners of the Plaintiffs/Tata group of companies or any other third parties/ general public".Sinha was posted as general manager last year in a realty venture called New Haven, spread over 21 acres in Haryana. He was asked to leave in June this year as "his services were found to be unsatisfactory". It was a few weeks after this termination that he took to social media against the company and its working with respect to the project. The suit filed by the Tata group company, which was represented in the hearing by advocate Tushar Cooper and law firm India Law, alleges that Sinha posted derogatory write ups about the company to Facebook and Twitter, and sent emails to the company's investors/financiers as well.

"The defendant (Sinha) has inundated various officials of the plaintiffs with emails complaining about his termination. The defendant, however, did not restrict his communications to the plaintiffs but also circulated emails to various journalists and representatives of media houses," the suit declares. The names of media houses mentioned in the suit, which were tagged in these posts, include established newspapers and news channels, both Indian and overseas. The posts created by Sinha ascribe "unethical conduct" to the firm and accuse it of "trying to fleece innocent customers", which have been termed as untrue in the HC suit. "There is generally a denigration of the Plaintiffs' and of the Tata Group as a whole. There is nothing genuine about the posts. They do not fall within the realm of fair comment. They are defamatory and slanderous allegations, and arise from, and only from, the defendant's demonstrable disgruntlement, disaffection and hostility," says the document filed in court.

The judge, in passing the order against Sinha, observed: "This is no sense journalism or fair reportage. The plaintiffs are not a public body to be held to have to prove a high standard of actual malice. I do not see how it is possible to conclude that the defendant's posts meet a good faith standard or can be said to have been made in the reasonable belief of their truth. They appear, prima facie, to be allegations levelled only to further a private agenda and a vendetta of some kind."

Heading of the news article itself is wrong, there was no boss bashing but the plaint in Bombay High Court was against a truthful REVIEW posted by Mr. Sinha in a legitimate way on Tata Value Homes Page on Facebook.

Every word of the posted REVIEW is correct that TATAs have increased Sale Area as per their choice to cheat extra money from customers (sic), Rs 5-8 Lacs on each affordable home targetting middle class. There is no libel at all and Mr. Sinha is taking appropriate legal steps.

With due respect to Hon'ble Bombay High Court, Nitya Nand Sinha is forced to write a reply because TATAs themselves taking illegal & unethical advantage of the interim order by briefing the issue in media after getting ex-parte order when notice was served to Mr. Sinha in Gurgaon practically a day before hearing in Mumbai which he could not attend.

Posting this issue by Times of India is also against media ethics as does not benefit masses, instead harrassing and maligning Mr. Sinha's reputation, an individual.

Attaching proof of cheating by TATAs on Sale Area issue, pl note their wording in email ”Decided”, not calculated.

Thanks and regards.
Nityanand sinha 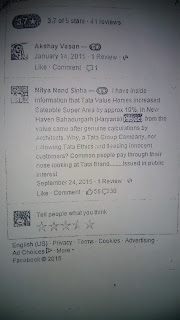