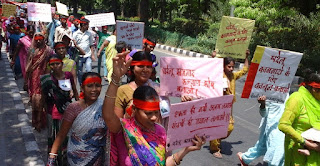 
Their main demads are compulsory registration in the labour department, minimum wages, fixation of working hours, weekly and other offs, health and accidental insurance, PF, pension, ESI and other provisions of social security. The memorandum said that the government must bring a new legislation for this purpose and form a Domestic Workers Welfare Fund to finance various schemes for them.

Kavita, convenor of the Delhi Gharelu Kamgar Union, said at the demonstration that domestic workers are the most neglected, oppressed and unorganised part of workers. They perform a valuable productive work but they are almost invisible.  The central and state governments have always hoodwinked the domestic workers. Indian government has not signed the ILO convention of 2013 on the rights of domestic workers. Two bills were placed in the parliament in 2008 and 2010 for the domestic workers but no party or government has taken the initiative to make this into a law. Some state governments have made some weak legal provisions or issued notifications to provide some benefits like registration, minimum wages, weekly offs etc but even these have not been implemented on the ground.

Vimla Sakkarwal, member of convening committee of the union said that if the government does not announce a committee soon to work on the law for domestic workers and does not announce to bring a bill in the coming assembly sessions, we will step up the agitation all over Delhi.  Delhi has more than one million domestic workers.Till then, some rights like registration, minimum wages, fixation of working hours, weekly off etc can be provided to the domestic workers by notifications and GOs like some state governments have done. The government can at least bring the domestic workers in the category of unorganised workers and make them entitled for the bare minimum legal rights available to the unorganised workers.

Apurva Malviya, member of convening committe of DGKU said a Domestic Workers Welfare Fund can be made by adding a cess on luxury goods and rich people and this fund can be utilised to provide social security benefits to domestic workers.

After the demonstration , a delegation of DGKU met with the OSD of labour minister who informed them that the Delhi government is working to prepare a bill but it will take 8-12 months. He said that the Delhi government is planning to implement compulsory registration through placement agencies. He also promised that the government will consider the union's demand to issue notification for some basic rights of domestic workers. The labour minister has called the DGKU delegation for talks next week. Later today, the ministry sent a letterto the secretary-cum-labour commissioner asking to examine the demands and sent a status report within 15 days.
Press Release
at 7:55 PM