Striking nurses continue their strike for the 7th day. 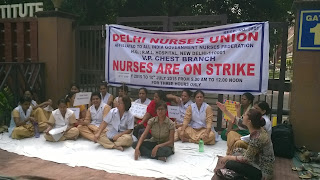 Nurses working at the Patel Chest Institute who have been on strike since the past 6 days continued their strike today. The nurses under the banner of Delhi Nurses Union have been on strike demanding that the benefits as per the recommendations of the Sixth pay commission be given to them alongwith the Bonus and other benefits. Inspite of the pressure from the authorities the permanent nurses on strike have decided not to give in to the pressure.