More than 2000 workers rallied in the capital to raise their demands in front of the Central and Delhi state government, Effigies of Modi and Kejriwal burnt! 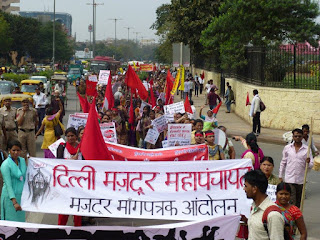 New Delhi| 7 March 2016| Thousands of workers participated in a massive rally and demonstration organized in the capital on Sunday under the banner of 'Delhi Mazdoor Union'. The workers raised their demands in front of Modi led central government and Kejriwal led state government. Effigies of Modi and Kejriwal were burnt by the demonstrators.


Anganwadi workers and helpers employed in Delhi participated in large numbers in the demonstration. Workers from all over Delhi employed in different sectors first gathered at Ram Leela Maidan from where a huge procession marched towards Jantar Mantar. A workers convention 'Mazdoor Mahapanchayat' was organized at the end of the rally at Jantar Mantar near the Parliament street Police station. Steel Workers from Wazirpur, workers from Khajuri and Karawal nagar, slumdwellers from the recently demolished Shakur Basti, Delhi state Anganwadi workers and helpers, workers from DMRC, workers from Gurgaon turned out in large numbers to participate in the 'Mazdoor Mahapanchayat'.Shivani the convenor of Delhi Mazdoor Union said while addressing the workers that in the past two years Modi government and the in the last one year Kejriwal government has only betrayed and befooled the workers. Both the governments have tricked the common masses. She further added that on one hand the Modi government in the veil of launching schemes like 'Start up India' , 'Skill India' and 'Make in India' is making the already pliable Labour Laws even more weak so as to facilitate an even more brutal exploitation of the workers and on the other hand it is exempting capitalists like Adani and Ambani crores of tax, which clearly reveals that the 'achhe din' promised by this government were not for the poor and the workers. She said even the promises made by Kejriwal to the common people of Delhi turned out to be hollow words. Kejriwal government quotes the paucity of funds when it comes to the payment of the workers while the same government increases the salary of its MLA's by a whopping 400 times to 2 lakh 35 thousands, and allocates 526 crores for advertisements. Both the governments are snatching away the rights of the workers and the common man one after the other in the garb of misleading rhetorics.

Abhinav from Bigul Mazdoor Dasta said that the apparent debate and protest that Modi and Kejriwal indulge in over the matter of Delhi is just a facade to trick people. Modi government is obfuscating Nationalism with Government idolization and whosoever questions the policy of Modi government, raises their voice for their rights is being immediately labeled as 'anti-national'. He said that to fight for the rights of the workers we will have to expose the fascist character of the Modi government. He said that parliamentary left and their trade unions are befooling the workers by just organizing token protests against the central and the Delhi government. A memorandum was submitted to the central and the state government by Delhi Mazdoor Union and other unions. The main demands of the workers are : 1) the anti-worker amendments being made in the labour laws should be stopped immediately, 2) Minimum wage of 15,000 should be given to all the workers, 3) Contractual Labour system should be abolished, 4) On the lines of MNREGA a National Urban Employment Guarantee Law should be passed and implemented, 5) the slum dwellers must be provided with pucca houses, workers, rickshaw pullers, hawkers, daily wage labourers should be registered by the Central Labour Minsitry as soon as possible.
In the massive rally and the Mazdoor panchayat apart from Delhi Mazdoor Union Bigul Mazdoor Dasta, Delhi State Anganwadi Workers and Helpers Union, Shakurbasti Jhuggi Punarvas committee (Shakur Basti Rehabilitation committee), Delhi Ispat Udyog Mazdoor Union, Naujawan Bharat Sabha, Automobile Industry Contract Workers Union, Automobile Mazdoor Sangharsh Samiti, Karawal Nagar Mazdoor Union, Delhi Metro Rail Contract Workers Union took participation.