Film Bazaar Recommends 32 film projects to watch out this year

~ Nawazuddin Siddiqui starrer Ghoomketu, Q’s Ludo, Alankrita Shrivastava’s Lipstick Under My Burkha in the FBR list selected out of 156 films in the ‘Viewing Room’

Mumbai, November 9, 2015: NFDC Film Bazaar, starting from November 20th to 24th 2015, is a development bazaar created exclusively to encourage collaboration between the international and South Asian film fraternity. In its ninth edition this year, Film Bazaar is focused on discovering, supporting and showcasing South Asian content and talent, in the realm of filmmaking, production and distribution.


The Film Bazaar Recommends 32 film projects including 22 features and 10 documentaries that one can look forward to in 2015. The 32 films are selected out of 156 projects (features, shorts, documentaries) submitted in the Viewing Room this year. 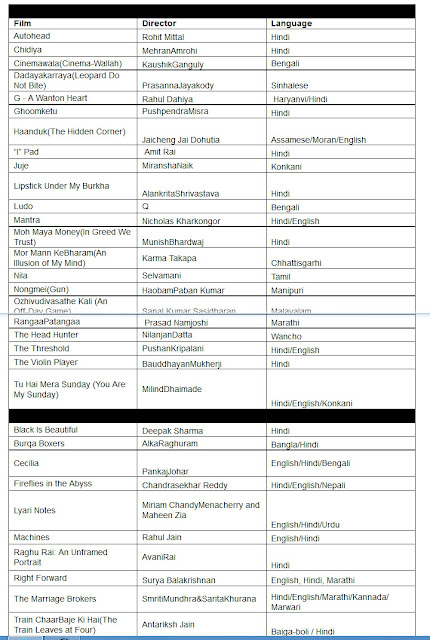 In 2014, a total of 130 films were presented in the ‘Viewing Room’, with over 30 films under the World Cinema and Available for Remake section. Whereas this year, 156 films in 29 different Indian languages will be presented in fiction and documentaries section which is a clear indication of a 50 % increase in Indian films this year.

Film Bazaar in its 9th edition is exclusively created to encourage collaboration between the international and South Asian film fraternities. The market aims at facilitating the sales of world cinema in the region. The 2014 market saw an attendance of 1042 delegates from 38 countries with country delegations from Canada, South Korea and Poland. Film Bazaar will be held from 20-24 November 2015 at Goa Marriott Resort in Goa (India).