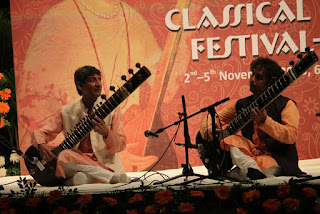 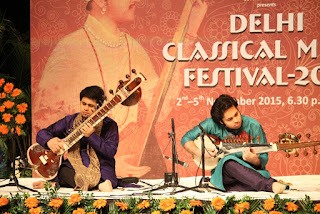 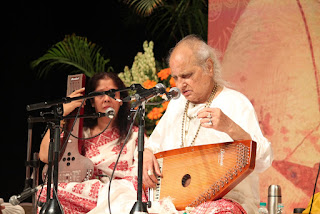 New Delhi : A striking jugalbandi of Sitar and Sarod by Lakshay Mohan & Ayush Mohan Gupta, a memorable vocal recital by the legendary Pt Jasraj and a euphonious rendition of Sitar by Ustad Saeed Zafar Khan made the third evening of the Delhi Classical Music Festival a memorable one. Organized by the Department of Art, Culture & Languages, Govt. of Delhi and Sahitya Kala Parishad, the Festival of Classical Music is showcasing multiple genres of music and brilliance of the country’s classical music traditions.

Disciples of the legendary Pt. Ravi Shankar, Lakshay and Aayush are the first Indians to be invited to perform at The Grammy Museum, Los Angeles for the opening of the exhibition – “Ravi Shankar: A life in music”. They opened the third evening of the Festival with a unique Sitar Sarod duet performance that won the hearts of the audience.

This was followed by a Sitar recital by Ustad Saeed Zafar Khan. Born in a musically enlightened family, the revered musician’s performances consist of excellent tunefulness, tonality, rhythmic patterns and raagdari (treatment of the raag).

The day ended with a memorable performance by the legendary Hindustani classical vocalist Pt, Jasraj. Panditji is known for popularizing Hindustani Classical Music among a global audience. At home, his contributions have earned him 3 Padma Awards – Padma Vibhushan – 2000, Padma Bhushan – 1990 and Padma Shree – 1975. He has also cemented his place as one of the country’s best known cultural ambassadors.

“The origins of Indian classical music can be found in the Vedas, the oldest scriptures in the Hindu tradition dating back to 1500 BCE. However, over the centuries, our music has incorporated inputs from multiple sources and has enriched itself with confluence of different traditions that met in the Indian subcontinent. Our instruments have held their own even in times of digital and techno driven musical instruments. Indian classical music is a true representative of our rich identity,” says Pt. Hariprasad Chaurasia.

“In recent years there has been an animated debate on whether our classical music is losing out to the modern pop culture. However, when I see young music enthusiasts eager to learn our classical traditions and keen to master their hands in it, I feel confident of a bright future for our indigenous music. We need more such festivals to encourage young talent on the scene,” says Ustad Amjad Ali Khan.

The music festival has delighted classical music lovers of Delhi and will end on November 5 with a vocal recital by Ashwini Bhide Deshpande and sarod recital by Ustad Amjad Ali Khan.
at 12:06 PM