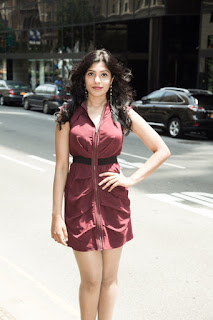 You know how we are born to do certain things but we don’t realize that until certain age? That’s how it is for me with acting. I have been a dancer and I’ve been performing since I was 4 year old. I also started writing poetry when I was in high school. And performed in several plays and skits. But arts were only considered more like extra curricular activities. I was my school topper and was very good in Math, so I did  engineering. I loved computers but as I grew up, the artist who has been hiding somewhere inside me has taken the centre stage in me and I slowly quit everything else and became a full time actress.


2. From where did you get started?

I’m someone who totally believe you need a guru to really learn anything. That guru could be even internet but going to proper school will help you gain a lot of knowledge and teach you the craft close to perfection. I have studied different acting techniques from various schools and I recently graduated from Lee Strasberg Theatre and Film Institute.

3. How many plays have you done so far? What kind of plays thrill you?

I have done a lot of plays since I was a kid. I have loved playing Sakuntala. Anyway, there is no feeling better than performing in any Shakespeare’s play. I want to time travel and meet Shakespeare. I love him.

4. In how many films you have performed up till now? What do you feel about your roles?

I have done two Hindi features and one Hollywood feature film. And I’ve done quite a few short films in different languages.

I’m very happy about the characters I’ve performed since I’ve done a variety of roles. Unlike many actresses who stick to the cliched glamor roles, I played everything from a crazy teenager nerd to a pain in the butt strong introvert.

5. Are you working on any current projects?

Yes. I’m playing the lead actress in a multilingual movie called “The Ring Around the Rose”.

6. Where is it filmed? And why did you pick that movie?

It’s been filmed in New York and Connecticut states in US. I personally love psychological thrillers though I write all dramas. I picked this movie mainly because it’s a woman centric story and the storyline has thrilled me especially the twist at the end.

7. Is it a distinguished project? If so, how?

It is absolutely a very different and unique project. Firstly to talk about the production, it is the first film ever been made as a language agnostic and location agnostic film. Rarely does a movie comes out that has a good narrative and mind bending twist like sixth sense and the others. ‘The ring around the rose’ is something that’s closer to those movies. There are few other things that are astonishing about this production which I’m not allowed to reveal it yet but this will stand out as the one of a kind movie in the world cinema.

8. Was your first Bollywood movie ‘Ooops a desi ‘ successful?

Success has many definitions and according to me success is doing what I love to do. However, if it has to be measured in terms of money it made, it definitely was successful because I think the movie was made in about $10,000 and it collected over 4 million dollars.

9. Do you call Ooops a desi as a distinguished project too?

Yes I do. You tell me how many movies are out there that deal with the life of immigrants who lose their legal status (F1 visa and H1B visa)?  And I’d say that it’s the first movie that breaks the terrorist stereotype.

10. Tell us about your role in ‘The ring around the rose’.

It is a heroine oriented movie. There is a lot to my character in this movie than just being a doll. I’m playing a character that has few different shades. I’m happy and proud that to do this role since it’s not about dancing in few songs.

11. What are your strong points as an actor?

I have everything what it takes to be an actor. I’m very comfortable and I work with ease on stage and in front of camera. Most of all, I’m a well trained actress and a dancer. I know how to become a character in case if it is very far from me. I can do different accents and I do different voices. I’m very good with improv and at the same time with classical pieces like Shakespeare, Chekhov etc.
at 3:59 PM