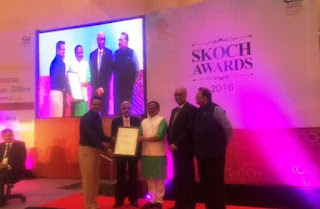 Mumbai 17th June 2016: Jharkhand has been adjudged as one of the 'top performing states' under the Digital India Programme for its dedicated initiatives to introduce e-governance and digital solutions to empower its citizens and ensure faster delivery of services. The award was given away at a programme organized in Mumbai to honor states that have performed well to further the goals of Prime Minister Narendra Modi’s Digital India program. On behalf of Jharkhand, State Information Technology Department Secretary Sunil Kumar Barnwal received the honour from Goa Chief Minister Laxmikant Parsekar.


Acknowledging its efforts to use e-governance for all round growth and development of the State, the Union Government placed Jharkhand among ‘Top Performing States’ of the country.  Elaborating as to how Jharkhand secured a position among top, Barnwal said that the Government has taken a number of initiatives which helped the State to become a front runner.

“In over last one year and half, we focused extensively on e-office, which will ultimately help offices become paper-free. We promoted start-ups in IT industry and helped them grow exponentially. We launched a number of mobile apps to ease processes at Government level. Then, we started a number of skill development programmes for industries and citizens, and I can say that Jharkhand is much ahead of many states if steps like this are taken in account,” Barnwal said.


Besides Jharkhand, Goa, Maharashtra, Mizoram, Uttar Pradesh and Himachal Pradesh also got awards as top performing states. The Narendra Modi government embarked on an ambitious programme to bridge India's digital divide, connect thousands of villages to the Internet and create millions of jobs through the initiative. Digital India is aimed at transforming the country into a digitally empowered society and a knowledge economy. The programme is centred around three key areas: digital infrastructure for all the citizens of India; emphasis on taking governance to people digitally and providing services online; and the overall digital empowerment of the people.

17th June 2016: With dip in the levels of Naxal violence and active initiatives by Chief Minister Raghubar Das led state government to promote entrepreneurship and improve the ecosystem for startups, Jharkhand is being swept by a new entrepreneurial energy led by its young citizens. At Namaste Start ups, a workshop organized by a group of private bodies at BNR Chanakya in Ranchi, a number of such enterprising startups are being showcased as part of the industry’s efforts to boost a culture of entrepreneurship in the state.

The Namaste start ups programme was inaugurated by Governor Droupadi Murmu who praised the organizers and participants. “The need of the hour is to promote these start ups and help youths not only to get self employed, but also provide jobs to others,” said Governor Murmu.

· Sumi Hembrom (27) manufactures cotton sarees and sells them in the weekly market near Kanthikund village in Dumka. She also she trains women in manufacturing what Santhals call the ‘Panjhi saree’.

· Though a Ranchi based person with disability, Rakhi Mishra (24) supplies handicrafts on demand. After collecting orders through watsapp, she uses a courier service to supply them to her customers across the state.

· Alfred Frenzy (25), an MBA from United Kingdom, serves tribals in Dumka not only by mobilizing them to end illiteracy and malnutrition, but also by making them sell their forest products to whole sellers instead of middlemen. This helps him earn and makes tribals gain higher rates than offered by middlemen.

Hembrom, Mishra and Frenzy are among several promising startups sprouting in Jharkhand, that are being showcased at the workshop with an aim to promote Startup ventures, to boost entrepreneurship and spur job creation in Jharkhand.

Jharkhand is buzzing with a new entrepreneurial energy, led by enterprising youth who are changing the face of the state with the power of innovation and resourcefulness. The positive changes come as official records show a clear decline in Naxalite violence in Jharkhand where the Naxal movement has been active since the past over four decades since 1966.

The event has been organized at a time when the NDA government led by Prime Minister Narendra Modi at the Centre has launched an official ‘Startup India’ campaign to promote the culture of Startups in India.

The BJP government at the state led by Chief Minister Raghubar Das has initiated special measures to improve ease of doing business in the state with an aim to spur entrepreneurial growth.

”We don’t want to remember the past. We want to look forward, come up with good products and compete in the market,” says Sumi Hembrom who produces Panjhi saree and trains tribal women in manufacturing the products inside her own house in Kanthikund village in Dumka.  It was in Dumba in 2013, where the superintendent of police (SP) of Pakur, Amarjit Balihar, and at least four other policemen were killed in Maoist violence.

Other interesting and innovative Startups showcased at the workshop include Pitstop, a company which provides home service to owners of two wheelers by picking up their mo-bikes and scooters, cleans them and brings them back to their homes on demand raised through cell phones/watsapp/email. Another company started by young and enterprising youths, ABCD makes available grocery and electronic products at customers’ doors.

The emergence of these fresh startups in Jharkhand has been welcomed by the Punjab National Bank and the State Industry Director K. Ravi Kumar.  “We are committed to offer them help in accordance with the state government’s guidelines”, said Kumar.