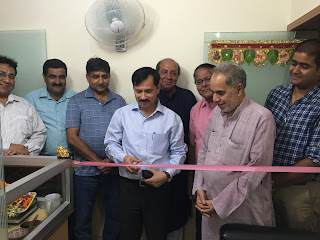 
Mayur Vihar is predominantly a journalist residential colony surrounded by many housing societies of media-persons. It is well connected by metro rail, city bus and three wheelers. The new headquarters of the IFWJ also has a legal aid room where Mr. Ashwani Dubey is available every evening. After 29 years the IFWJ has a legal help cell. When the IFWJ had its office in the Shankar Market Flat (till 1988) its law cell was manned by respected lawyer B.K. Pal, a senior advocate of the Supreme Court who always helped needy journalists and newspaper employees, particularly in wage board matters. Mr. B.K. Pal would not exploit for fees the victimised journalists as happened during the Majithia wage board time.

The foursome who graced the opening ceremony have been old IFWJ and associates. Rahul Jalali’s late father Pandit Pran Nath Jalali, was PTI bureau chief in Srinagar (Kashmir) and president of the IFWJ unit in Jammu and Kashmir. He had organised the IFWJ national media session in Srinagar in 1985. Mr. Ram Bahadur Rai was the news editor of the daily Jansatta (Indian Express Group) and editor of the monthly Yathaawat. Prime Minister Narendra Modi was his apprentice in the RSS. Mr. Vasindra Mishra is a member of the IFWJ working committee and before joining the Zee Media he had worked in Lucknow for the Times of India and the Hindustan Times. He was vice-president of the U.P. Press Club. Mr. Vinod Kumar Tomar, an MBA and B.Tech, leads the 2.5 lakh executives of 250 central public undertakings. He is the General Secretary of the MTNL Executive Association, representing 4,000 officers of Delhi, Mumbai, Nepal and Mauritius. Mr. Tomar is also the Chairman of the Joint Forum of MTNL Unions and associations all over India. A message of good wishes was sent by Mr. Shiv Gopal Mishra, General Secretary of the million-strong All India Railwaymens Federation (AIRF) and President of the National Federation of Newspaper Employees (NFNE) who is busy with the proposed national strike of central government employees for the pay commission issue. Mr. Shiv Gopal Mishra favours the IFWJ headquarter office to house the NFNE office also. Already the Delhi Journalists Union Office will be housed in the same premises.

At the function Mr. Ram P. Yadav announced that the 71st session of the National Council of the IFWJ will open at the Indo-Pakistan Border town of Jaisalmer (Rajasthan) on Friday, 23rd September and close on Monday morning 26th September, 2016. The organiser is Mr. Upendra Singh Rathore, Vice-President of the IFWJ and noted frontier journalist.