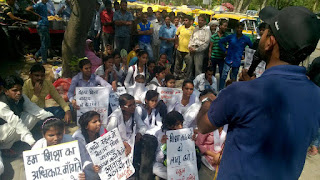 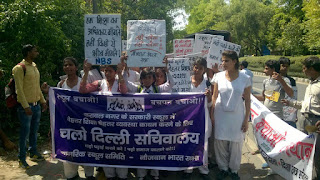 11 April 2016| A protest demonstration was organized today at the Delhi Secretariat against the discrepancy in the exam result of 9th and 11th class of a government school in New Sabha Pur under the banner of Naujawan Bharat Sabha and 'School Nigrani Samiti' (School Watch committe). The school students, their parents and other concerned citizens participated in the protest. It needs to be noted that on 1st of  April the results of  class 9th and 11th were published for the girls shift in the Government school in New Sabhapur, Karawal Nagar. More than 80% of the students had failed in the exams. After the result has been displayed on the board at school, the distressed students rushed to the teachers and Principal.

The Police threatened the students and their Parents with false charges and severely beat them. The next day the activists of Naujawan Bharat sabha went to the Police station and asked for their release. An initially relectant Police had to grant bail to the arrested parents as they lacked any evidence against them after the Activists of NBS mounted pressure at them. The activists after getting the arrested released distributed a pamphlet in Karawal Nagar urging the students and their Parents to organize a public meeting on 3rd April to discuss the further course of action. On  4th April the activists distributed a pamphlet outside the school and in the neighbourhood urging the citizens to intervene in the matter so that the future education of the girls is not hindered. After this on 4th April at 7 in the evening Police barged into the Karawal Nagar located office of Naujawan Bharat Sabha, started abusing and beating the activists present there. The activists were arrested. On 6th April a protest was organized by concerned citizens and activists against the harassment of the students, parents and the activists of Naujawan Bharat Saha at Delhi Police Headquarters where a delegation of the protestors met with the Delhi Police Commisioner Alok Verma who assured them that action will be taken in the matter against those responsible.

The Parents of the students also met with the local MLA regarding the matter but in vain. Yogesh from Naujawan Bharat Sabha said while addressing the gathering that a serious violation of the prescribed governmental regulations is happening in the State Higher Secondary Girls School in New Sabhapur and the Education board is taking no action in this matter. A total of 10,000 girl students are registered in the abovementioned school. There is a serious shortage of classrooms, desk and benches, there are not enough toilets and even drinking water is not available for the students. Because of lesser number of classrooms the students have to sit outside in the scorching sun in summers. As there are more number of students the school is run in four shifts and each shift lasts for about 2 hours. Therefore the students from class 9th to 12th are only taught for 2 hours each day. The ratio of 1:30 Teacher to students ratio is also not adhered to. There are as many as 90 to 100 students in each class. The present condition of the school raises a lot of serious questions about the entire education system and government. This is the reason why we have come to Hon'ble Education Minister of State Mr Manish Sisodia with this matter. This is not just the situation with the schools in Karawal Nagar but almost every student in government schools in Delhi is grappling with the same problem.

A large number of students, their parents, conscientious citizens participated in the protest. A memorandum of the demands was submitted with the Education Minister in which the demands such as re-evaluation of the answersheets, suspension of the Principal, improvement in the infrastructure of the schools were included. Deputy Secretary to the Education Minister Manish Sisodia met with a delegation of the protestors and assured that the Delhi Government will inquire into the matter. He also assured that re-evaluation of the answersheets will be done. Revolutionary songs were preformed in the protest.
at 8:38 PM