Amole Gupte to write and direct a biopic on the life of Indian Badminton champ, Saina Nehwal 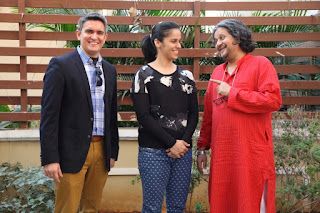 Mumbai, December 18,2015:  Great news for all sports fans! A biographical sports drama based on the life of Indian badminton champ Saina Nehwal is in the oﬃng. Mumbai-based Front Foot Pictures Pvt Ltd, a new age content creation  company, has acquired the rights to make a biopic on the life of India's ace shuttler, Saina Nehwal. The acclaimed writer-actor-director, Amole Gupte has been roped in to write and direct the much-awaited film.


Talking about the story of the film, Sujay Jairaj, one of the directors of Front Foot Pictures Pvt Ltd reveals, “It’s going to be a very inspirational story, which will boost the entire country. It is a story of a current sports star and so both the younger and the older generation can relate to it.”

Sujay and his team, along with Amole Gupte, recently met Saina Nehwal and her family at the Nehwal residence in Hyderabad and spent a warm afternoon with them.

Talking about the meeting, which lasted for nearly three hours. Amole says, “It was like meeting a goddess and her family who are so excited about the upcoming biopic. This film is going to trace Saina’s pulsating journey on her way to the top of the sports pyramid.”

The writer-actor-director is all praises for the Nehwal family. “What gracious hosts, the Nehwals! The hand that rocked Saina’s cradle fed hot hot parathas, delectable sabzi and dahi- the flavor of which I have carried all the way back to Mumbai” he says, overwhelmed by the warmth of the Nehwal household."

How is it going to be different than other sports biopics? “How many times have we encountered either a male or a female Indian get prime ranking in a world sport? None- except Saina Nehwal. That makes it different, doesn’t it? It’s a story of a ‘tigress beti’, ‘princess beti’ who has set fire to the badminton court with her prowess like no one else before. The nation needs to know the story of the 'World number 1 beti’- an icon for the young and the old, for a long time to come,” says Amole.

About Amole Gupte
Known for acclaimed films like Taare Zameen Par, Stanley Ka Dabba and Hawaa Hawaai- Amole wears many hats; that of a writer, director, producer, child rights activist and an actor. Most recently seen in Singham Returns, he is known for his roles in Kaminey, Bheja Fry 2 and Phas Gaye Re Obama. As a filmmaker, he has been lauded for his work with children and has always succeeded in integrating a strong sense of social commentary in his films.

About Front Foot Pictures Pvt. Ltd.
Mumbai-based Frontfoot Pictures Pvt Ltd is a new age content creation company that is focused on creating world class sports content, ranging from films, TV content, and specialized content for the web and mobile. The Saina Nehwal biopic is the first of multiple projects that are in the oﬃng. The company is headed by Sujay Jairaj, who himself is a keen badminton player and has played at the national level.