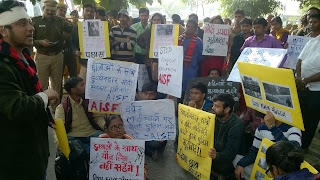 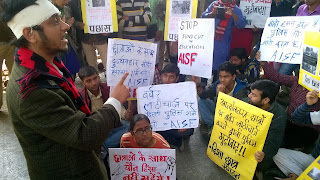 Delhi : Scores of students today came out to against the brutal police repression of the Students protesting the scrapping of non NET fellowship and the privatization of education outside Delhi Police headquarters. Yesterday when the students had taken out a march to Parliament the Police had erected layers of barricades to prevent the students from carrying out their peaceful march. Women protesters were manhandled, grabbed from their hair, groped and dragged on the roads beaten brutally targeting their private parts. All this was carried out by male Police personals of Delhi Police, several students were gravely injured. Several rounds of tear gas shells were wired at the gathering, the students were water cannoned and brutally beaten by the Delhi Police.


The male police officers went ahead and hurled abuses at women protestors and told them that they will be molested like this if they come out to protest again. More than 50 students were injured in the crackdown 8 of whom have sustained grave injuries. Last night when the agitating students went to Parliament Street Police station to lodge an FIR against the sexual harassment of women the Police officials tried to intimidate and threaten the students with counter FIRs. Today Dis student organization, Coordination committee of OccupyUGC movement, various democratic rights organization PUCL, PUDR, PUCR condemned the Police brutality and demanded that strict action should be taken against the Police officials involved in the crackdown on students.

Baby from Disha said while addressing the gathering that yesterday not only were we physically brutalized but our democratic fundamental right to protest was also violated with shamelessness by the Police. We were peacefully protesting however the government is so scared of our voices of dissent that they ordered such a brutal Police crackdown on us. Pankaj from PUCL addressed the gathering and said that all the conscientious individuals should unite and condemn unequivocally the brutal violation of our democratic rights.

The OccupyUGC students have been protesting for more than a month now against the scrapping of the non NET fellowship by the UGC, privatization of education and the WTO GATS agreement to sell education by the Government. The Modi Government has however maintained its very contentious silence over the demands of the agitating students. The students today submitted a memorandum of their demands with the DCP stating that strict action be taken against the police officials responsible, and that Delhi Police should issue an apology to the citizens of the country for this violation of their fundamental rights.